Member of Parliament for the Meriden Constituency

Dame Caroline was first elected to Parliament in 1997 as one of only 34 new Conservative MPs when she won the West Midlands seat of Meriden. Born in 1958, she was educated at Herts and Essex Grammar School before reading European Studies at Queen Mary College, University of London and graduating with first-class honours.

Caroline is fluent in French and German and worked for the sugar beet industry in Paris for six years where she met her husband Mark.They have three children, Eleanor, David and Jonny.

As an Member of Parliament Caroline has consistently campaigned to protect the greenbelt, introducing a private members’ bill to prevent garden grabbing in 2008.

She also fought to improve end-of-life care with a palliative care bill in 2009. She has helped to set up two charities in the Meriden constituency; one which helps rehabilitate people with drug addictions through training and employment opportunities, and another which provides a refuge and support facility for victims of domestic abuse.

These achievements together with the part she played in helping bring a young boy called Ali Ismael Abbas out of Iraq when he was left orphaned and critically injured in a missile attack are some of her proudest moments in her Parliamentary career.

Caroline was invested with the title of 'Dame Commander of the Most Excellent Order of the British Empire' at a service in Buckingham Palace on 10th February 2017 for longstanding public and political service.

On the rare occasions Caroline has free time, she is a keen gardener, an enthusiastic cook and an avid fan of cricket and rugby.

Caroline was re-elected in 2017 to serve Meriden as it's MP for a sixth term. She serves as the Second Church Estates Commissioner in Parliament and is chair of the All Party Parliamentary Group for the Horse. 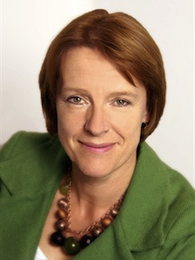 Caroline was first elected as the MP for the Meriden Constituency in 1997. In opposition she held a number of posts including shadow Secretary of State for Communities and Local Government, International Development and Spokesperson for Health. She was also Chairman of the Conservative Party. From 2010 to 2012 she was Secretary of State for Environment, Food and Rural Affairs. Caroline now serves as the Second Church Estates Commissioner.